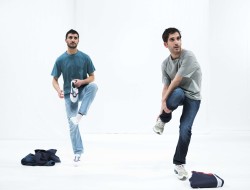 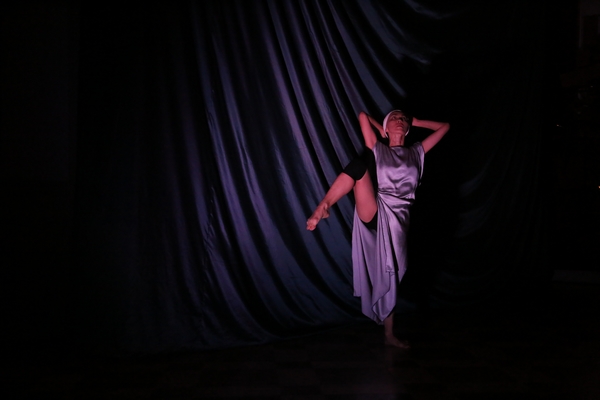 Do you know Stabat Mater, one of the greatest Latin Hymns of all times?
During Bmotion Dance 2016, four choreographers, Giorgia Nardin, Yoko Higashino, Mélanie Demers and Yasmeen Godder, were invited to build a performance on this melting masterpiece.

It was a commissioned work performed in three different little deconsecrated churches, and probably something that they would have never done by themselves because so far from their usual artistic path.

That’s why it was interesting to see how they got themselves into the game, integrating their work with some personal aspects – the experience of losing a beloved one. They went ahead in the research of female icons – a process previously developed in other works of theirs – disrupting the sacrality of the Hymn trough a “pop” glance, or again developing it into human “deposition” like the Deposition of Christ depicted in art.

Yoko Higashino and Mélanie Demers put themselves in the scene by solos, Giorgia Nardin entrusted her work to non- professional dancers of the “Dance Well” – Parkinson-Project, while Yasmeen Godder handed Stabat Mater directly into the public’s arms.
Through different musical choices, the choreographers deeply immersed the audience into loss, into social suffering, in a sense of compassion divine or worldly, heavenly or human. Passing from the light of laughter to the darkness of pain and viceversa, and in some cases without forgetting to struggle against the moral and physical pain, through its own parody. 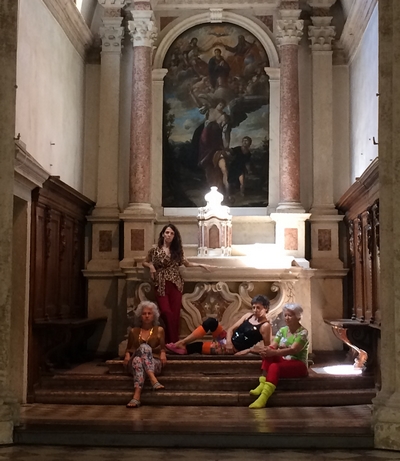 Giorgia Nardin approached Stabat Mater in a profane way, she doesn’t come from a religious tradition, so she worked to break the sacrality of it, and the grandiosity of its aurea.
As we said the work was commissioned, so it didn’t respond to her first urgency, I mean in her artistic path.

After reading the Hymn, Giorgia put it aside, preferring to work artistically on female icons and on the imaginary that they might evoke. This was and already undertaken study for the creation of «Season», the new work presented in national premiere on the same days in Bassano.

Daniela Scotton, Eva Boarotto, Anna Maria Scodro and Giuseppina Toniazzo, performers of “Dance Well”-Parkinson Project, brought their own experience to form the work.
Colorfully dressed in spotted and sensually gaudy garments they rose directly from where the audience was sitting, breaking the silence and the sinless light of the little church “dell’Angelo”.

Who were they? Ladies leaving the dance hall? Luna Park owners? Clowns? Grotesques Maddalenas?
Whoever they were, they turned towards the altar abandoning themselves voluptuously at its feet. Maybe they wanted to seduce us trough their glance, but their irrepressible laughter dissolved the malice of the wait into a funny mystery.

If the work on the gesture and the movement remained too much on the surface, the glance of the four women has been amazingly touching and powerful. Their eyes said more than thousand words. While the music of Vivaldi thickened the air, we saw in their eyes all shades of emotions for each lived their age. They were dreaming, suffering, frightened, and grateful.

If Giorgia Nardin wanted to break the sacrality of Stabat Mater, the work on the gaze, that she created with the performer, built an intense and moving relationship, as if it were mended it with a gold thread. 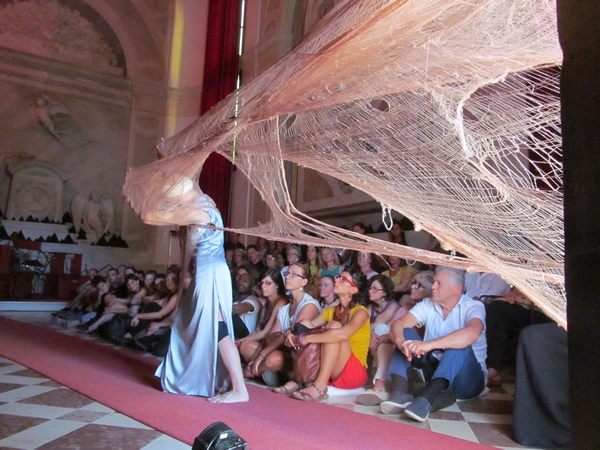 Yoko Higashino: «We are Mary, We are not Mary»

Yoko approached Stabat Mater looking at her own femininity, her experience as a woman. She hopes to become a mother again one day – unluckily she has been it just for a short time.

Reading Stabat Mater her heart and her mind reached the pain of losing a son. A suffering shared and made universal in the scene through her dance matched with few and intensive words in front of the audience, while her body followed what her eyes were looking for into the holy space of the little “Oratorio Ca’ Erizzo” church.
«I’m Mary, I’m not Mary, I’m losing my son, I feel my son everywhere…
Your’re Mary, You’re not Mary. You’re losing your son, you feel your son everywhere…»

Yoko Higashino Stabat Mater version is an “expressionist” journey into intimacy, to the inside of a visceral and mental wrap, that guards every feeling and emotion collected in life. It’s a physical dance matched with scenographic effects that became poignant metaphors.

Her body was covered by a nude membrane but as strong as a net and secreted like a cobweb, when she appeared from the door of the church, shrouded in daylight.
Wearing a light blue robe like Mary, her hair in a white headdress, she walked on a red path trying to free herself from her membrane of pain. Her arms were stretched towards a hill of red chairs stuck into each other, they looked like “Golgotha”, while her hands became bigger looking for a foothold. Just the poignant music of Pergolesi accompanied her.

Darkness came as soon as she got free and the door closed behind her. The music changed into a scratchy sound and she danced the pain, and the loss coming from pain. Her eyes were wide open and her fingers were moving in the space like in Butoh Dance, while she was swallowing in mouthfuls her red path. She tried to find comfort in the light, in the dialogue with the divine, but fate was stronger and presented itself at the door in the form of a big cloud while she was dancing anger and non-acceptance, and ate up her and her anger. 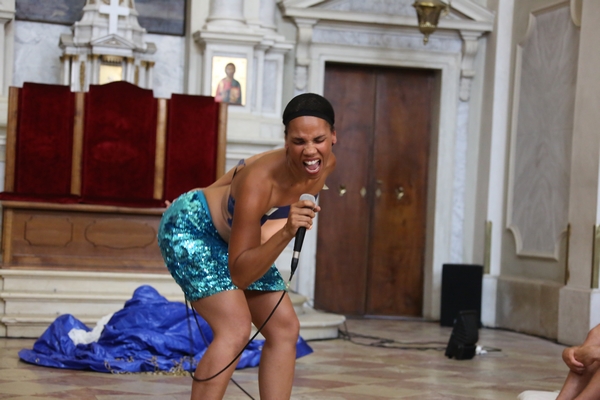 Mélanie Demers: «When Mary is a pop star»

Mary is probably the most popular woman in the world, maybe even the first feminist of the history.
Her image is everywhere: in necklaces, tattooed on skin, in wallets, and even Barbie has not given up on wearing her clothes. Of course, Mary is as popular as a pop star.

Mélanie Demers was interested in the iconography and in the metaphore of Stabat Mater as a symbol, and how she could translate it into something contemporary for her.
She embraced the theme of the social suffering in Stabat Mater and linked it to the suffering of all women and to her own, without underlining it, just turning to ambiguity and paradox through three different layers: the iconic view of the Vergin Mary, the iconic view of a pop star and what is more iconic in an ordinary woman.

So the choreographer brought her Mary on the red carpet of celebrities while a singer was singing a heavenly vocal Stabat Mater. It was a grotesque short circuit, playing with the sacred and its corrupted, humanly blasphemy.

Mélanie was Mary. She was the celebrity in her solo, rickety on heels, wearing black glasses and a blu plastic handmade dress over a plastic breast, while a long gold chain was tightening her neck. A celebrity with her ordinary and dramatic poorness.

There was suffering in her contracted muscles, and in her hands closed in a fist. Of course, that fist could strike violently, but it could also resemble the gesture of a baby clinging to life. There was suffering also in her voice singing “I’m a survivor” like Beyonce, and then laughing persistently while she was lying in her throne.
Among the audience there were many children and for a moment I thought that in front of that scene one of them could stand up and scream: «look, the king is naked!». 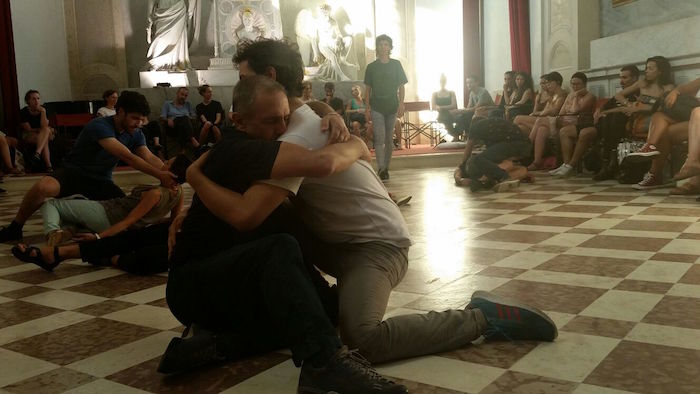 Did you ever expect to be moved during a performance of Yasmeen Godder? I didn’t.
But I did, and like myself many other people. Godder’s Stabat Mater has been a real surprise. I never expected from the choregrapher something so delicate and moving. Her vocabulary is usually unsparing, out of control, a concentration of provocation and aggressive movement, a beastly imagery. And her surreal hilarity devours the scene throwing the audience into chaos.

But her Stabat Mater was unbelievable. She created with simplicity a relationship between the religious message and the artistic expression, involving the public into a deep e intimate layer, regardless of their religious beliefs.

Her work was an interactive action which has developed with Shuli Enosh, Dor Frank, Ayala Frenkel, Uri Shafir, Ari Teperberg and Ofir Yudilevitch, all the dancers who we saw in the other work, «Common Emotions», also on the stage during Bmotion.
And we can say that this Stabat Mater is a new investigation on what inspired the previous work: «What makes us take part into a social cerimony?» «In what way can a performance, intended as a shared experience, influence our relationships with others?».

In the beautiful “Oratorio Ca’ Erizzo” church we were part of a shared “Deposition”, like the deposition of Christ depicted in art. We were all, including Yasmeen Godder, sitting inside the church backs to the wall so as to open a circle, waiting only to be inhabited. One by one, at different times, the dancers stood up and went to one of the spectators who was asked to support the weight of their body until laying it down on the ground.
After taking care of the body, everyone took his place and could choose whether and when to make the same request to someone else.

There was no longer the separation of roles, between performer and audience, perhaps there was no longer any show, because we were part of something more.
Every request, every body on the floor drew a secret story. And another one was visible in the eyes of those who watched. Mothers deposed their children, their father or mother or brother; sons their mothers, fathers or brothers. In the circle there were the bodies whole family constellations. And the weight of the body became a metaphor of sin, grief, weight of life and soul.

But the sight of those bodies on the ground, sometimes in broken form, sometimes carefully ordered, eyes turned upwards as if they were conversing with the fresco “Adulterous Woman” on the ceiling, or closed in the silence, also recalled the images of the many bodies that, in these years, have been seen lifeless on the sea shores, or that only a few weeks ago lay under the weight of their homes.

Many of us had shivers and tears in the eyes. And the moment we were part of was even more touching because of the musician and vocalist Tomer Damsky, who performed a special live version on the Hymn, playing also an harmonium.

At the exit, many of us felt we had to thank for what we, more or less secretly, had been part of.