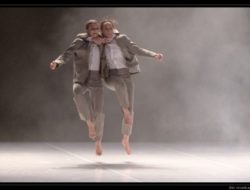 DANCE ON DISPLAY | “The Lion’s Den” by PocketArt 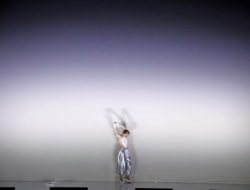 INTERVIEW | “Hands Up”. A conversation with Agniete Lisickinaite... 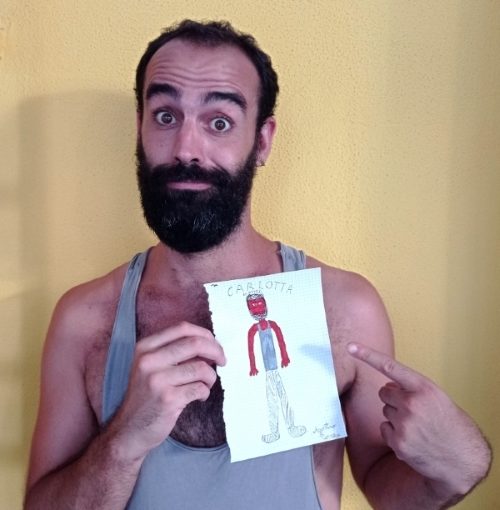 BMotion Danza 2022 | We asked Matteo Marchesi, dancer, choreographer and much more, to write a contribution on his experience with the young dancers of Mini BMotion Danza 2022 — the dance training project aimed at youngsters between 8 to 13, this year led by Marchesi himself together with Martina La Ragione. What emerged was a thoughtful account of the most salient stages of the programme, the methods and strategies adopted, and an account of the profound mechanisms that give rise to dance and its ‘learning’. There’s a wide-ranging reflection on the opportunities and potential in working with children. A slant that breaks free from those stereotypes with which children are often categorised and that, instead of belittling and diminishing the realm of childhood, elevates it up to a privileged vantage-point of observation of the dynamics of acquisition, learning, transmission, relationships and creation in and of dance.

It’s a pointer towards pedagogical research in dance and, more generally, into the processes at the very root of dance, which transcends boundaries of age. It’s also an invitation to experiment, with children leading the way, the fruitful viability of an artistic approach: its “method”, its “techniques” and its “lexicon”, along the paths traced by keywords such as “playfulness”, “engagement”, “embodiment”, “playground”. Here is his article. Have fun reading!

Dancing between points of view through the Mini BMotion Danza experience

How to make children’s experiences relevant for adults, and how might this invisible bridge between age groups be crossed?
This is one of the questions that popped up for me as an artist playing with boys and girls between 8 to 13 years-old. This year the Mini BMotion programme was a blend of dance-based practices, participation in a selection of performances scheduled for BMotion 2022 and processing of feedback via various interactions; writing, drawing and questioning. For four days — brief yet condensed — my generous colleague Martina La Ragione and I had daily been setting aside about three hours in which to say “yes” to whatever the group of kids were engaging in. We would delve into our tool boxes of know-how tin order o guide, relate, or sometimes simply to be present to what was happening. By “whatever” I don’t merely mean the creative, normally positive, content that delivers a satisfying outcome, but also the discomfort of boredom, misunderstanding, disagreement, fear of commitment and of not really knowing each other (either between these kids themselves or them with us). 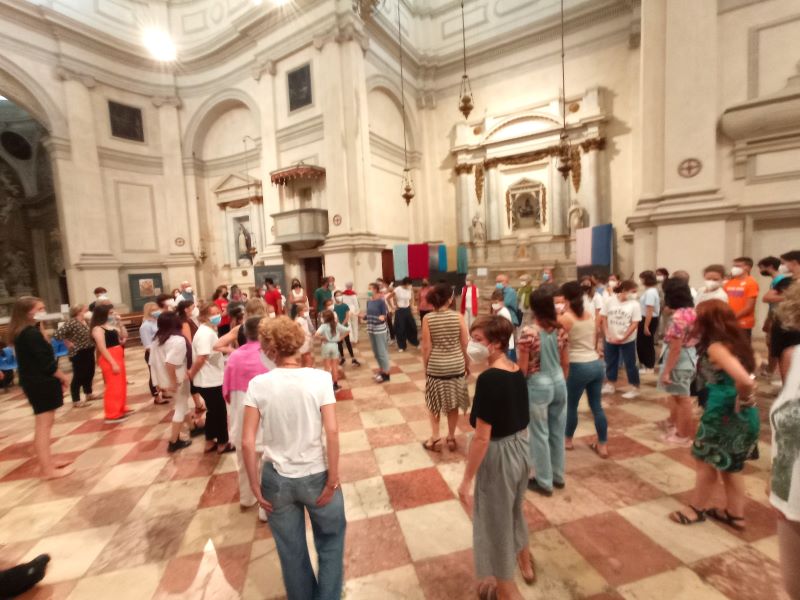 All of us are complete beings; we are all born, in our own bodies, each nuanced, imaginative, able to connect and with a rich emotional spectrum — and it was that which initially formed our backbone.

It’s difficult to define by just one label this complex process undergone, and memory tends to slightly reshape it every time we generate narratives of past events, so it’s perhaps more practical to begin by summarising what did not take place (or what shouldn’t happen in any context whenever art forms and children/adolescents share a common playground).
It hasn’t been an escape: playfulness in dance and other physical practices do not substantiate an evasion away from a mature artistic process or from the convolution of engaging in art with other people (children included).
It hasn’t been a resolution: the creative practices, that comes with dance, visual art, dialogue and writing are not providing immediate, consistent solutions to the challenges of growing up and of being present within a social context. This would require time to adapt at any age or circumstance, as well as the evolution of their personal experiences beyond the limited time-frame of our programme.
It hasn’t been limited to a dance class: the aim of our exercise was not modelled upon the imparting of a physical vocabulary for a few selected dances, but to encourage curiosity and engagement in a space of self-expression and inter-relationship. Those two elements are, in my experience, a solid base upon which to evaluate worth, in ourself and others, through responsive bodies, playing a role in the balancing act between being rooted in the real world and yet able to envision alternative realities, indeed an ongoing endeavour that continues into adulthood. 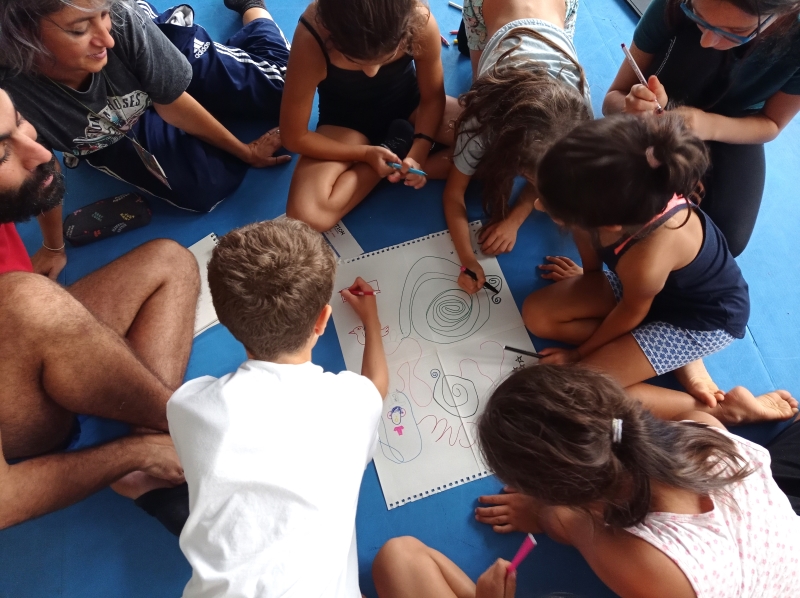 Mini BMotion Danza 2022 | Some kids while drawning their feedback on “Molding Bodies” by Ian Ancheta. Photo by Abcdance Blog.

The scenario outlined may well give the impression that there was more angst in the experience than pleasure, but this was not the case. We had spaces to explore and play in as creators, witnesses and interpreters of our own dances as well as those performed by others, indeed that was enjoyable.
Moreover, being part of something that we don’t quite grasp or fully comprehend can also be compelling, strange as that sounds. These subtle discombobulations are well known by anyone who attends performing arts events, often challenging our abilities to discern the context, or purvey content that runs counter to our own set of beliefs, or even make us feel estranged and excluded from what’s unfolding in front of us. That ludic unsettling applies to youngsters too.
But the potentiality of shifting our standpoint remains as long as the playground is our figurative milieu. This is unlikely to reorientate any final judgement, yet it does skew the perceived reward of the experience. 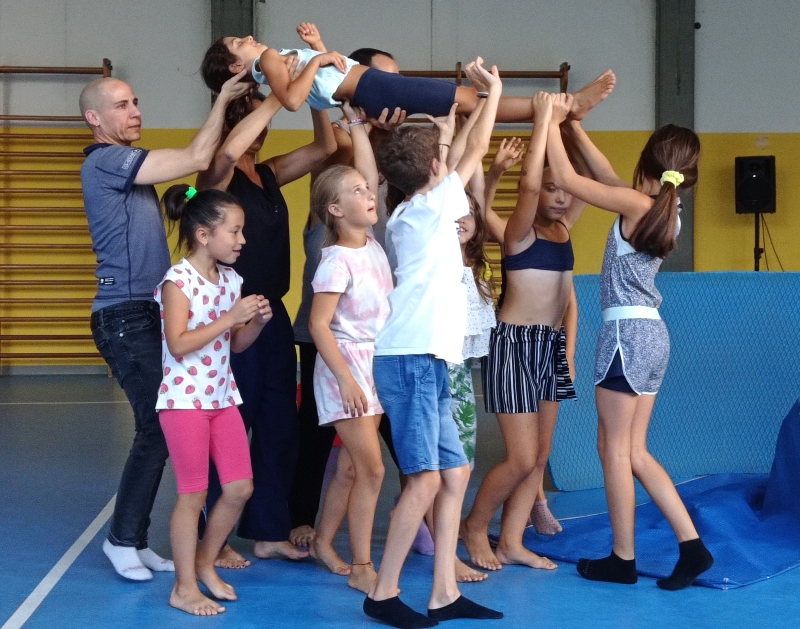 Mini BMotion Danza 2022 | A moment of the workshop led by Daniel Mariblanca. Photo by Abcdance Blog.

So how to recognise it?
At the very first meeting with the Mini BMotion group, the possibility arose of playing with our names, reinventing our identities in presenting ourselves to others. It wasn’t planned. It was self-generated by the group’s internal interplay, but in a sense it was perfectly consistent with the need to make the playground idea explicit, ready to welcome whatever (or whomever) we wished to cast in, coming from a personal and perpetually valid point of view. As Bernie De Koven (game designer and ‘fun theorist’) points out in various publications (e.g. The Well-Played Game), the playground is fundamental in bidding society to play. In our case, moving around different physical spaces on a daily basis, the confines of our playground had been determined by making our points of view explicit, starting from introducing ourselves, expressing who we are or who we would liked to be in that moment, which we were able to revise day by day. These dynamics are possible too in adult daily life, all the more so within the specific context of a dance festival, where, beyond verbal hindrances, what happens on stage plays with the personal perspective of each individual in the audience, everyone part of the same playground as well as co-creators of it. 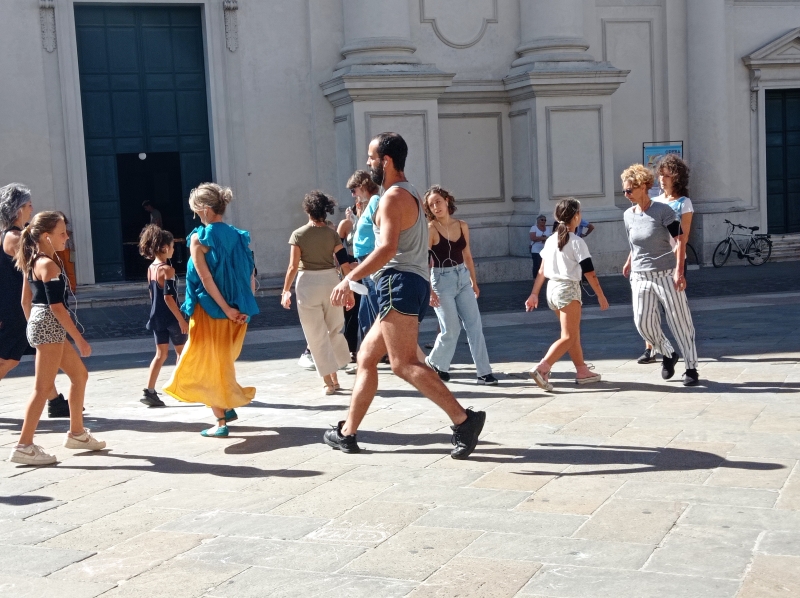 BMotion Danza 2022 | Matteo Marchesi and some kids while attending the performance “Vibes#” by C-DaRE. Photo by Abcdance Blog.

In order to give ourselves permission to keep or change our point of view, we ought to consider the degrees of freedom that any specific group which we are part of allows. It is different every time, whether in a group of boys and girls or part of an audience. It is based on listening. Easier said than done, but that is where the body comes into its own: even in the midst of conflictual emotions, a willing person possesses enough physical tension to respond, although not enough to single-handedly bridge the distance between two bodies that have yet to come together.

Considering that dance, professional or amateur, past or present, has always included elements of playfulness. Playing by engaging one’s body in space is a key feature in the processes of dance creation. For this reason it seems to me quite organic and appealing to incorporate perspectives from a range of ages, embracing childhood and adolescence, within a contemporary art context.
Every dance experience from all sides of the stage is nourished by the interplay between perception, sense-making and curiosity, and this was clear in the sessions we shared with the duo Pocket Art and Daniel Mariblanca. They mediated their expertise through curiosity, sensibility and listening attentively to a group of boys and girls whom they had never met before.

In conclusion, these age gaps (and possibly any other disparity) from which we started are not so much there to be bridged, but are instead there to be listened to, played with, even misconstrued, enjoyed and definitely welcomed into an accessible playground for the rich diversity they have to offer.

MATTEO MARCHESI | Matteo Marchesi, born in 1987, is an Italian performer and dance choreographer. After studying dance, set & costume design at the Accademia delle Arti di Brera, Milan, he further developed his research process in consultation with established artists such as Roberta Mosca, Tillman O’Donnell, Keren Rosenberg. Riccardo Buscarini and Cora Bos-Kroese are amongst the directors he worked with, as well as being selected to the position of Assistant Choreographer under Virgilio Sieni for various community dance projects. He is currently working as a performer with Silvia Gribaudi and has the role of Associated Artist of Zebra (under the artistic direction of Chiara Frigo and Silvia Gribaudi). Since 2016 his dance practices have been focused upon improvisation technologies and on the integration of divergent artistic languages and tools in a somatic-sensorial experience, a practice towards developing community accessibility, engagement and choreographic creation. Workshops and collective research, in a multidisciplinary setting, are fundamental facets of his artistic process.

To get more info about Matteo Marchesi click here.