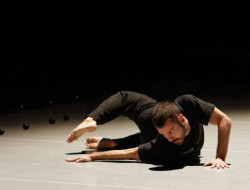 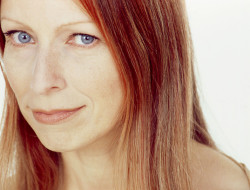 Marie Chouinard celebrates Hieronymus Bosch in «The Garden of... 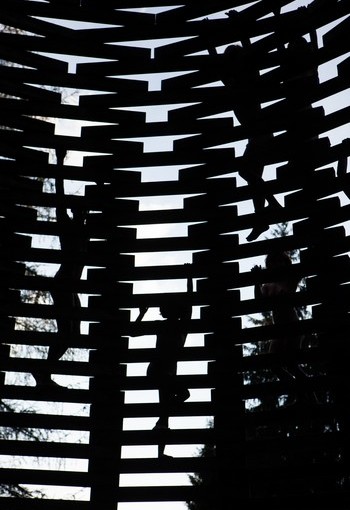 Also this year we reached Arte Sella, the «contemporary mountain» near Trento, for a new appointment with a ‘barefoot’ dance of OperaEstate Festival.
And what a surprise to find so many people there – despite the drooping rain and a cold that forced us into winter clothes in August – coming for «All Ways» the last site specific work of Sharon Fridman.
The Israeli choreographer is already known and loved by the audience of the Festival, especially after «In Memoriam- After the end». This touching social project commemorates the hundredth anniversary of the Big War, and involved more than 300 participants between dancers, amateurs and singers.
We created a reportage on it last year, when it was accomplished. 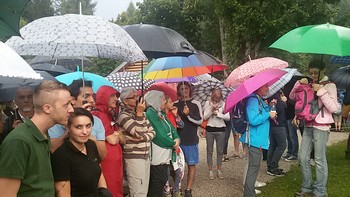 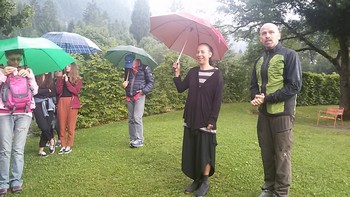 Arte Sella is a fascinating 2 kilometres itinerary among art and nature that live together in an harmonius embrace thanks to man’s creative hands. The result is an even greater enchantment with that kind of beauty of unusual, temporary and unfinished things.

In such beautiful open and natural space the dance of Fridman arrived with all his physical and spiritual power. This was for us even a contemplative experience.

«Sharon really really really works with nature, his work is nature. He really feels the association with nature. So this place is perfect for him, because you encounter art that was inspired by nature and so is his work. Everything here makes a lot of sense for him.» said Mey-Ling Bisogno, the dancer/choreographer assistant to the work, after the performance.
I felt we were more than simple audience, we were there not just to discover a place, a project, a new relationship between them, but we were there even to be unaware dancers.
«This is something that Sharon has been working for a long time – Mey-Ling continued to tell – he likes people to be a part of his work, like in «Rizoma». It’s something that really touches, interests him. I think that for the public this awakes more sensitivities to the work they are watching, they are also partecipating some how, sometimes more, sometime less, it depends…» 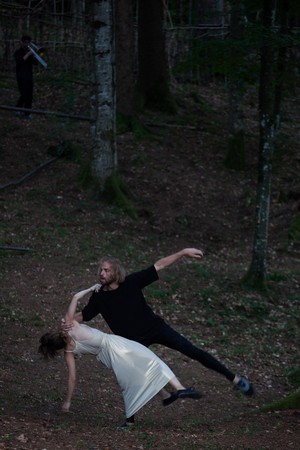 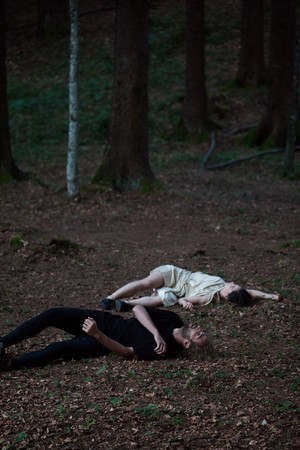 Infact I felt we were dancing with our step by step between the sound of the rain and live music of the trumpet.

I felt we were dancing with our own walking in straight line along a little path among sculptures that seemed to be gathering life from fairytale and falling clouds, like angels toward the Earth.

I felt we were dancing even in the moment we were separated in two groups and each group saw the naked bodies of the dancers coming forth as sons of the Earth. It seemed as though the Earth itself had given birth to them in that very moment and slowly walking they would reunite with us there where we were awaiting them.

Again I felt we were dancing even in the moment we were rejoined in a circle of bodies, and then closed in a choir facing the dancers, like an ancient call, while they were rolling down like leaves from the wet mountain.

And definitly I felt we were part of the work because I recognized what a dancer of the company told me after the shows:«The most basic sensation outdoor is that all the senses become very open: the hearing, the sounds, the texture, the intensity of small details, but in a very wide space. And there is more connecting with our body. While I was lying down I thought I was perceiving more from each of my collegues. I was travelling with my gaze and my immagination towards everyone also in the last corner.» 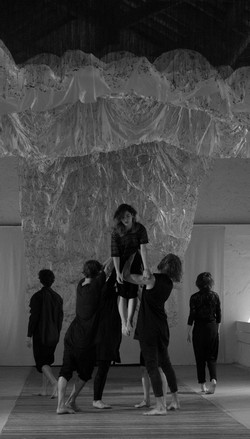 But there was even something tragic and painful in the dance and in the expression on the faces of the dancers. Especially in the last part of the work that took place inside the “Malga” where black clothes covered the bodies of the dancers (and like «In memoriam» took its matrix from «Rizoma» I discovered that this last part is also the first step of the next creation of Fridman).

15 minutes filled with tension watching seven dancers putting together an intricate weaving of nerves, strength and balance, each of them becoming a support to the other, a grip, a crutch. Each part of their body became a foot rest for one of the dancers. As her eyes looked far she formed her path over their stomach, shoulders and back. She built her way her “All ways”.

But what Mey-Ling told me at the end of our speach has been a new revelation of beauty…
«Fragillity is something beatiful and dramatic. Sharon exposes this fragility and then actually it touches us differently everyday, it touches you like this today, but maybe tomorrow it will touch you in a different way. I don’t think it’s about drama. It’s just to expose the very thin balance and fragility of the world. And also allow people to receive this and to be touched in the way they would want to be touched. This is because everything is so different, we are different one from each other, things are different one from the other, we are different from one minute to the other. So I think that beauty lies in the fragility and I think “All Ways” is about this.»