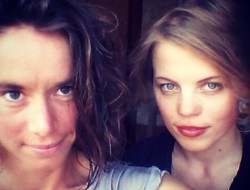 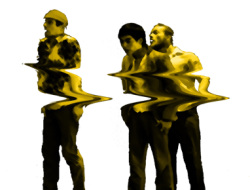 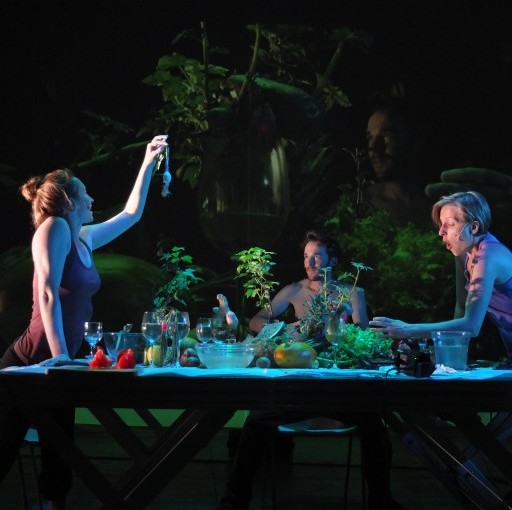 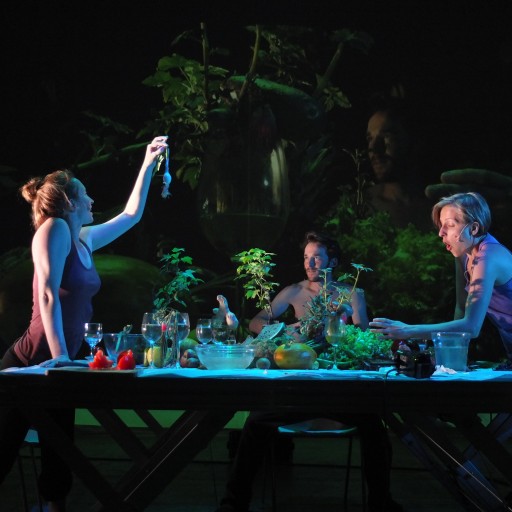 Where’s the dance? Implores the droplet of water falling from the ceiling.

In a perfect silence it plinks upon the ready-laid table and propagates a slow resonance, widening into a circle of sound.

People in flesh and blood are conversing amiably around the table. When they eat the amplified sounds of their biting, their sipping and their moving erupt in an audio orgy that upsets the vision of what had seemed an irreproachable dinner party. Enlarged images of fruit and vegetables on the table are projected on to the screen, transforming the food into stories, gestures into narratives. The fringed extremities of a mushroom, the turgidity of a strawberry, the noise of masticating food between the teeth brings to life a gigantic green universe, an augmented reality where amplified sound and magnified images peel away new layers of content, evoking a primordial past and potential all-devouring future.

Human voices are swallowed-up within a bubble, audio and visual, inside a glass of water. The magnified shot of the glass exposes the lie of its purity, revealing the microbes that swim inside, bristling and ebullient. Every organic thing is inhabited by the transformation, pervaded by micro-universes. Everything contains a universe of meanings. Thus a kitchen knife slicing through tomatoes affords the oxymoron of a plant cruelty: a massacre of red pulp and innocents. The capturing of a mouth that swallows a piece of pineapple describes a voracious atrocity, almost bestial.

The shot of the table evokes the remains of a Caravaggesque still life, depredated by buzzing flies. Fragments of human discourse stir prophecies of an unavoidable future, raising emotional landscapes worthy of Lars von Trier’s Melancholia. “I have something to tell you. But I can’t” repeats one of the guests abstrusely whilst a primeval forest of pineapple leaves, purple grapes and aubergines succumb under hands that rip, rupture, crush; mashing everything they pick to swallow. The surviving sprigs of sage keep resisting around the bushy thickets, the hair. The face of one of dinners starts to resemble Spring herself who, torn between Botticelli and Arcimboldo, exfoliates into a common slut. We all see the sun in an orange; the ocean in a glass of water; microbes become abyssal algae, and we observe the decomposition that consumes cucumbers with mould and decimates raisins on bread. Finally an effusion of milk exudes out of the mouth like a jellyfish in the sea, an exultant eulogy of Nature restored to itself.

A World that dances. Without us.

Read the original italian version of the review

Read the interview with Chris Haring