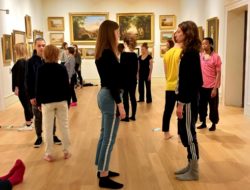 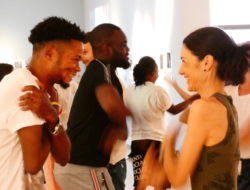 From Dance to Words: the polyphonic glossary of Migrant... 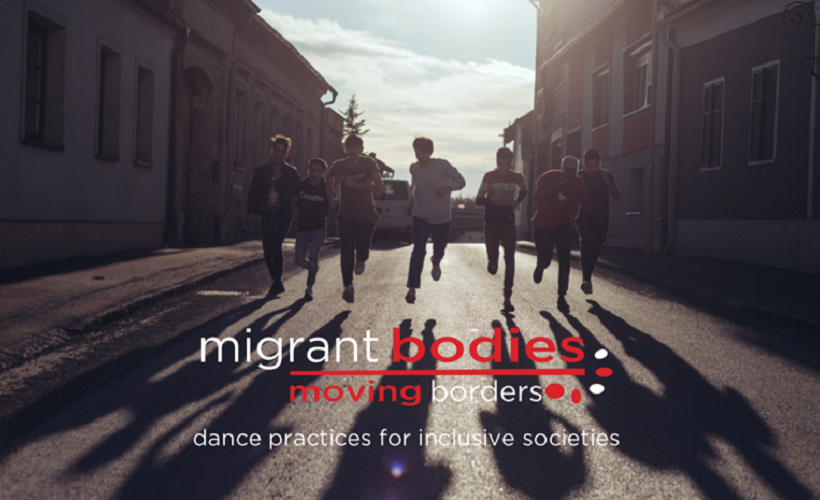 It was only February 2018 when the project Migrant Bodies-Moving Borders started: four countries involved in investigating contemporary dance as a human right and as a means for social cohesion and cultural inclusion. The project, supported by the EU Creative Europe Programme, has seen four dance artists researching new practices that could break down barriers while at the same time building a common language. After two years the partners – CSC Centro per la Scena Contemporanea (Italy), La Briqueterie centre de développement chorégraphique Val-de-Marne (France), D.ID Dance Identity (Austria) and HIPP Hrvatski Institut za Pokret i Ples (Croatia) – have presented the first final results in a Symposium held in Bassano del Grappa on July 12th and 13th, 2019.

Two days introduced, surrounded and imbued with dance, as it was the best way to really demonstrate the results of these cultural interactions, sharing, learning and mutual understanding. A 1hour dance class started the day among the works of art of the Civic Museum of Bassano: Selamawit Biruk (Ethiopia), Lamin Suno (Gambia), Bita Bell (Iran) and Sangeeta Isvaran (India) connected the participants first to their body, warming it up, and then to each other, greeting, presenting and interacting with the new mates of this artistic body journey. In the afternoon the dance practice was carried on even further by the four dance artists entitled by the project: Žak Valenta (Croatia) and Andrea Rampazzo (Italy) challenged the participants memorizing sequences and playing with distances, while Jordi Galí (France) grouped these connections creating a human body constellation that Katharina Senk (Austria) brought out into the city with a body walk ended in an explosion of energy and good vibes.

With the guide of Monica Gillette – editor, choreographer and dramaturg – the symposium of the first day was then focused on confronting the different experiences faced by the four partners of the project Migrant Bodies and their dance artists, while the second day presented the digital publication and the film produced as evidence of this two-year journey [www.migrantbodies.eu]. The starting point for Roberto Casarotto (CSC Centro per la Scena Contemporanea) was the statement that «dance is a human right», and as dance is connected to our body, thus it is also to our society. Through dance you get to meet people sharing time and common spaces, and this creates connection. In Bassano the dance classes have been developed from the experience gained through the Dance Well project, started with Parkinson’s people spread then to people with Cancer, and now to visually impaired, always with the idea of «learning by doing». Another key point has been the location of the dance classes: the choice of a museum has given ownership to the citizens, life to the artistic heritage, and it has opened new perspectives come from the use of the body with its movements and its variety of cultural legacy.
In Austria, specifically in Burgenland, Liz King (D.ID Dance Identity) has been working for fifteen years with unaccompanied minor refugees, collecting them once a week so that they passed the word making the practice bouncing into other groups. Again it’s important the location, to bring someone out of his/her habitual space, but it’s also very important to consider the need of giving back, to be hosted, to know where and how they live, to be a new «family». Situation completely different and very displaced instead in Croatia, a «gateway to Europe», as Mirna Zagar (HIPP Croatian Institute for Movement and Dance) shows. Where politics is so involved and controlling, the dance artists have proposed classes in the streets of Zagreb to draw the attention of the passers-by. Here the breaking point has been identified in the kids, in their curiosity and still intact need to play. Even in France children were the first to participate to the dance practices, while adults stood studying what was going on. Elisabetta Bisaro (La Briqueterie centre de développement chorégraphique Val-de-Marne) tells that despite the presence of a Migrant Shelter Center close to Paris there have been several unexpected accidents which made them realize what a challenge could be to create a social space through dance and a practice that shift the perspective.

The four dance artists involved have tried to conceive facilitating practices to create a new ground of encounter: «dance first, think later» has been their guideline through this journey. For Jordi Galí (France) it was important to realize that in every practice you are dealing just with a human being, an individual you can or cannot connect to. The real thing that we all have in common is our body, something we always bring with us, therefore these encounters should happen more easily through the body language. Andrea Rampazzo (Italy) underlines the importance of having had a «facilitator», someone who could help in building trust and mutual understanding. The practices then need time, the time of a farmer who waits for the seeds to grow while nourishing the ground. Speaking about time, Katharina Senk (Austria) has discovered the importance of «unstructured time», the space before class and after it, where you build encounters and connections. Žak Valenta (Croatia) instead stresses the importance of being well-informed, putting you out of your comfort zone to grasp the real information and still respecting the privacy we all need.
The body journey of these artists has been collected in a digital publication edited by Monica Gillette who has created a polyphonic glossary of 100 words defined by 50 authors to give this sense of diversity and different perspective that every concept can have. The glossary is also interspersed with essays, interviews, graphics and in-depth analysis of the personal journey of some international artists, choreographers, authors, lecturers, social workers and filmmakers [►download the publication]. And about filmmakers, the symposium of the project Migrant Bodies–Moving Borders ended the morning talks with the screening of the movie Migrant Bodies by Max Biskup (D.ID Dance Identity), an intense, delicate and amusing report of these two-year workshops [►watch the trailer].

Among other artists’ participations there were the interesting and touching talks with Sangeeta Isvaran and Bita Bell who brought their experience of facing conflicts, censorship and hierarchy finding artistic ways to «bridge the gaps». Sangeeta Isvaran bases her practices involving at different steps the physical, sensory, emotional, analytical and spiritual level, in order to «be without fear», without shame or judgment. And when life put you in front of injustice, try to resist to anger and channel it into positivity in the space of love. Bita Bell – raised in Teheran, studied in Ohio, now living in Vienna – who feels «local» only to her body, has learnt to resist to injustice performing: «doing what I do, in the place that I decide to», a choreographic space, horizontal and democratic, where Art and Creativity can transform our fears. Sangeeta too underlines the power of dance, the importance of learning and knowing its grammar but mainly the need to perform, to connect to an audience, to make it «contemporary» bringing it into society.

The afternoon left space to different artistic practices: on the first floor of Palazzo Agostinelli the students of the 4th year of the Fashion Design course – IIS A. Scotton Breganze showed their artifacts created by collecting stories of migration while together with the students of the Graphic Design course they built the logo for the T-shirts of Migrant Bodies–Moving Borders. On the ground’s the photographer Sara Lando made available paper, camera, colors, glue and scissors to let visitors create their own story-book, amusing themselves and living a trace of their artistic soul.
Space also for performances: the Italian choreographer Beatrice Bresolin presented her creation Io e l(?)oro_donne alla ricerca dell’oro, developed by her own solo shared with 16 women in swimsuit who dance with a square of fine fabric to create headgears and shelters that empower their female dignity. Late at night the Italian dance artist Andrea Rampazzo shared his final work Just Papers, realized through the workshops held in these two years with the residents of Associazione Casa a Colori and GAGA Vicenza, together with the support of Anna Bragagnolo. On stage there were Selamawit Biruk, Abdi Buule Mahamed, Precious Igbineweka, Lamin Sumo, Vittoria Caneva and Ilaria Marcolin who explore the space and the rhythm trying to find a common clap and a common ground to connect. A fragile, temporary and moving connection, a hug made precious by luminous sheets of paper that mirror the temporary light of cooperation, support and balance while waiting for those so aimed Papers [►interview]. And to relieve souls and bodies final Dance Jam Session with DJ SK Bado at CSC Garage Nardini!