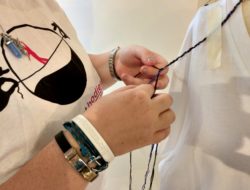 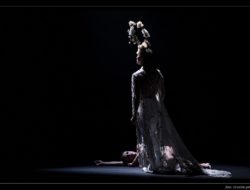 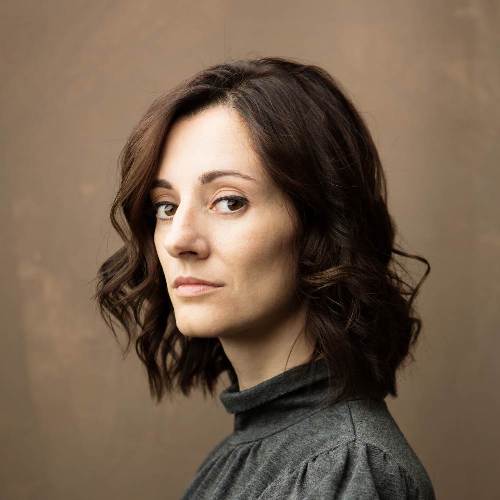 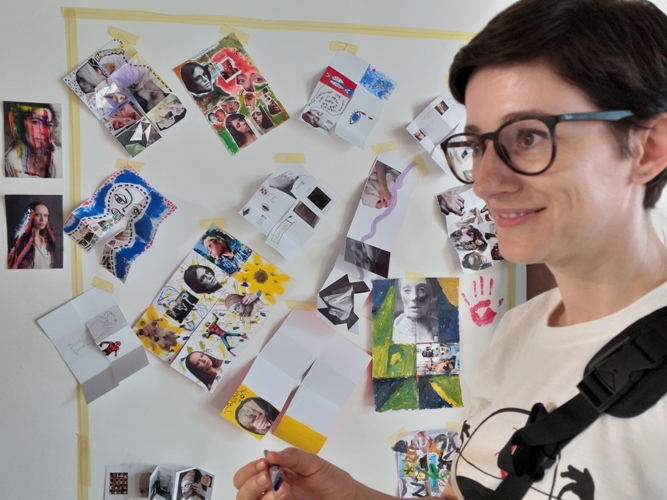 ENG | 13 July 2019, Symposium Migrant Bodies, Bassano | Sara Lando is a fascinating individual, a woman with an iridescence, like the hues of nature itself. Both her body and her words are never still, they dance so fast that at times one has to concentrate extremely attentively in order to latch onto her racing thoughts, ideas launched towards a future that has already passed for her, already implemented so she flits on to the next thing. She is a photographer by trade, perhaps because through photography she is finally able to halt, fix and immortalise an otherwise always open, fluid, infinite time-span.

She held a mixed media workshop in one of Palazzo Agostinelli’s ground floor rooms for the European project Migrant Bodies. On the walls there were small posters with instructions as well as booklets made by the participants. On the tables were pencils, markers, scissors, watercolours as well as some high-resolution prints of some of her  photographs, made fully available, used as stimulants for the participants’ creativity, they were free to utilise them as they wished, to cut them up, paint on them or simply disregard them, gravitating towards other imagery. Here are a few snippets from our interview. She discusses the laboratory and, in the end, reveals a bit more about her.

ENG | Could you tell us about the laboratory you held for Migrant Bodies?

It was the evolution of a seed that germinated last year, actually during the Migrant Bodies project, from a reflection made on the theme of a personal archive. I have always worked with mixed media, always explicating its possibilities to others and always seeking to democratise photography. But it was only last year, by participating in the dance classes, that I began to join-up a series of dots, so to speak. It was as if the work that I have been engaged in for the past ten years had finally found a home in one place.

This is the fruit of my research into a way to offer people the means by which to share their personal archives, even allowing them to regain possession of the right to opacity, or the possibility of recounting a fabricated story, of talking to oneself without divulging anything to the staff, to opt to leave a sheet of paper blank because “it’s none of their business”. On occasion photography is an appropriation of the lives of others, despite good intentions. Photography has the arrogance of wanting to give voice to those who do not have it, even if it would be sometimes better to keep quiet and leave the room, allowing others could speak.

In a sense, the job I’m trying to do is to take the photographer out of photography. Photography is a language but it is not always necessary for the photographer to act as a translator. Sometimes it is simply a matter of giving people a grammar, a dictionary and leaving space for them to fill with their own words. I have tried different ways of interaction because I am still in an experimental phase, one in which I am trying to understand what way is best. I am wondering whether it might be better to either work with a smaller group with whom to impart very clear and structured instructions, or with a larger number of people with whom very little in the way of instruction is conveyed. I am pondering if it is better to have a lot of time available — days or even whole weeks, as in this case, or only allot an hour and a half, in which people can come and go freely and are quite unrehearsed about what might transpire.

It is interesting for me to see how this work changes based on the context. I worked in a group of 15 people who took over an Air B&B for 48 hours and for those 48 hours dedicated themselves to creating artists’ notebooks. But I have worked in completely different contexts, ones where you are free to enter and leave, without being officially registered; where you can decide to just observe others without actively participating and where no one is ordered to show up and […] you don’t even have to give your name. This is something I learned just by participating in Dance Well classes: there’s an effort in not asking people who they are. Being asked to introduce myself is a neutral request for me, one that I have an easy answer to. But for others, those going through a vulnerable relationship with their own identity, that social moment can be a very taxing affair. So the endeavour is to create a format: a library of people… managed by the people themselves! This is not my personal archive, but an archive amassed thanks to the spontaneous donations of others, in which I take the role of a librarian who collects otherwise lost books.

Did anything unexpected happened in this uncustomary context for you?

Mainly the way in which people threw themselves in, eyes shut, and they just started to work. Normally they require a longer gestation period, because when people are put in front of a blank sheet they often go into crisis mode. It takes courage, plus a little at a time. Sometimes they need hours. I think this time it happened as it did because the workshop participants came from a shared physical practice. In fact, I realised that physical practices are an astounding catalyst, an aid in speeding up the sharing of one’s own intimacy. It is as if passing through the body would allow us to eliminate all those preliminaries that are usually needed when indulging in an artistic practice and such self-doubts as “maybe I can’t do it” or “I have never done such a thing before in my life” or “what on earth should I do?”, etc. Most of these people came from a morning of dance practices. They had already given up their time, in a sense, taking this workshop as a sort of continuation. Plus they found themselves in an environment where everyone did what they liked and, as often occurs when nobody is in judgment, you just throw yourself in.

How do you intend to make use of the material that you are gathering?

I will compile a photographic record of the booklets made, or rather of those that have been presented, because not everyone had chosen to present their work. Some took them away, but that’s fine, because this is also part of a process where one assimilates the right to say “this story is not yours!”

Then, I will probably design a website where I’ll assemble all this material and encourage people to create their own booklets. The instructions are very simple. Just a sheet of paper of any size, which must first be folded in half and then again in four. There is a single cut, then it is folded like an accordion. It has eight facing pages and does not need to be bound. One advantage is that it’s truly inexpensive. It is a simple formulation that exclude no one, it ensures anyone can afford to acquire the material to create it. My objective is that I no longer have to be present during the making of the booklet, and that people can construct their own booklets even if they’re on the other side of the world. I would like to “create mass”.

How will you “create mass”? Do you already have “islands” of people in mind or do you intend to entrust everything to the internet?

Well, I travel the world for work, so I can actually be present on many occasions. Then I often collaborate with associations and hold workshops for schools. But from the moment that the first instruction materials will be accessible via the web, anyone will be able to construct their own book, anywhere.

At the moment the name of the project is Human Layers. Indeed, this is what I call the files that are sent to me. But the concept of stratification, of layers, emerges quite strongly from this work, because there are distinct levels of meaning embodied in these booklet; some accessible, others more private. There are also material layers. I see it from the way people work on their books: through a stratification of drawing, collage, painting. It is a kind of reverse archaeological dig where, instead of excavating away in order to unearth layers, they are built-up. I’m convinced that Human Layers will prevail as the title of this project.