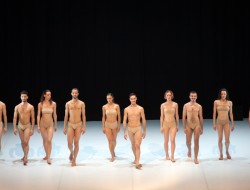 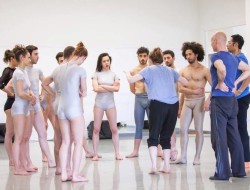 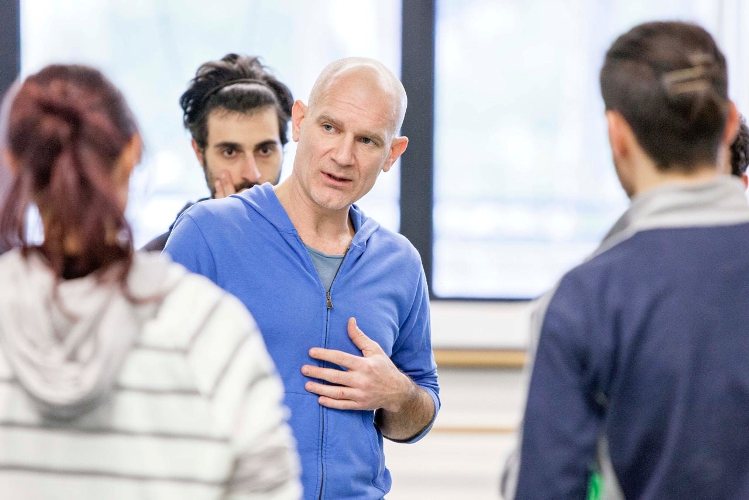 “Wow what breath!” the lady sitting in the audience behind me exclaimed. The hard, bitter heart burst in this second act; Chris Haring’s authorship is in full evidence here. A dark respiring gasp opens the scene. A solitary, deep breath, amplified not just by microphone but also by that powerful diaphragm of the prostrated dancer, which continues to swell unyieldingly. Breathing that becomes a wave, tenacious, repetitive, culminating in a choral dance where each dancer adds their own accentuation to this rough sea of bruised bodies, to this spectral abyss of mourning and avenging fury.

“Nicht alles ist todt in Westphalen, was begraben ist”. Not everything that’s buried in Westphalia is dead — wrote Heinrich Heine in his Elementargeister. Not anger, not resentment, no urge for vengeance.

“This isn’t a fairy tale. There’re no happy endings, no prince. […] There is no love, there’s no Kind feeling except hatred towards those responsible for all this pain and the only way to assuage it is to kill” — goes the voice of a girl off-stage, delivered in Italian. The wave motion of the dancers propagates rhythmically and vertically, from breastbone to diaphragm and abdomen; stretching in rhythmic steps, oozing over the stage like molten lead. In synchrony they perform a sinuous dance macabre, which gradually turns into a witches’ sabbath, into tumult, into torment. Through just breathing the bodies are made anonymous, non-erotic, emptied. They are simulacra, uninhabited shells, lacking warmth. Spirits that trace out sinuous waves. Off-stage dialogue in English splinters the repetition of the dance with crude concurrence. Indeed it is through repetition that death stumbles in. Because far from being trivial, premature death is serious, onerous, debilitating. All the dancers take up the arabesque and hammer the stage, criss-crossing it from two rival directions, arms like slow arrows already let loose. Then the dancers discolour into corpses, ghosts, apparitions, leaving silent repetition and death.

I talked to Chris Haring via Skype. He was in Vienna where he was busy with the debut of his Candy’s Camouflage at ImPulsTanz – Vienna International Dance Festival. Here is the interview. 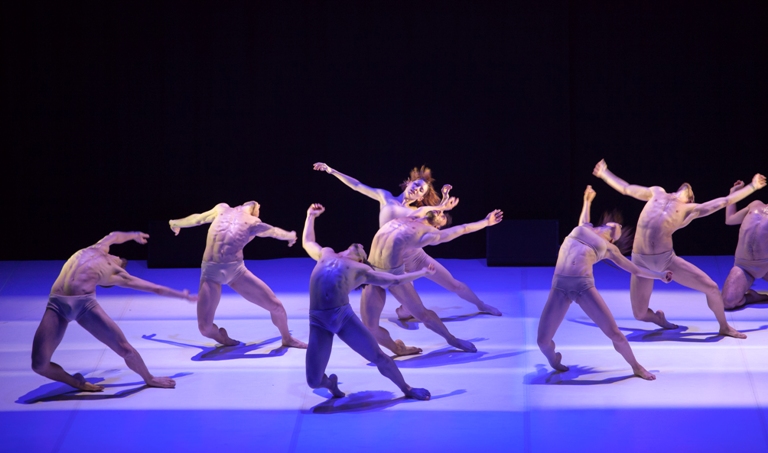 Who has been Giselle to you as dancer? Who is Giselle nowadays?

In our piece we didn’t try so much to relate to –as you saw- one specific figure but just take the figure as an inspirational source and spread it out from the dancers. For me Giselle wasn’t like a man or a woman, it was more an emotional feeling. Basically, somebody who has been knew through his or her own emotions. When Roberto [Casarotto] asked me do it I said okay, because I’m more interested in the second part.

Why are you more interested in the second act?

Because this idea of the Willis [fairies] is something I can relate to nowadays as well. I mean, for me the first question was this revenge thing: why do these women [the Willis] kill that man [Albrecht]? And then I did a little bit of research and found out that the original tale came from Heinrich Heine’s Elementargeister and he took it from the Slavic folk tale.

I tried to find it on Google [the location of the tale] and I discovered that the first woman who wrote it down was somebody from a village which is on the Hungarian border. The town where I grew up [Schattendorf] is only 5 kilometres from there. So, I thought that’s great!

In my opinion they came up with this tale of the Willis to especially protect the young women from being raped or being abused by older men or by men with power. And so they came with this fable in order to take care of them — don’t do that because afterwards comes this and that.

And I found this very interesting because it’s a kind of …traditional way of making things right and fair again. This was the main thing that touched me in Giselle. Giselle by herself is a victim of circumstances. She’s not naïve but she’s a victim. And this thing of revenge for us was the main thing. Giselle is not specific in my piece, in our piece Giselle is more like everybody. 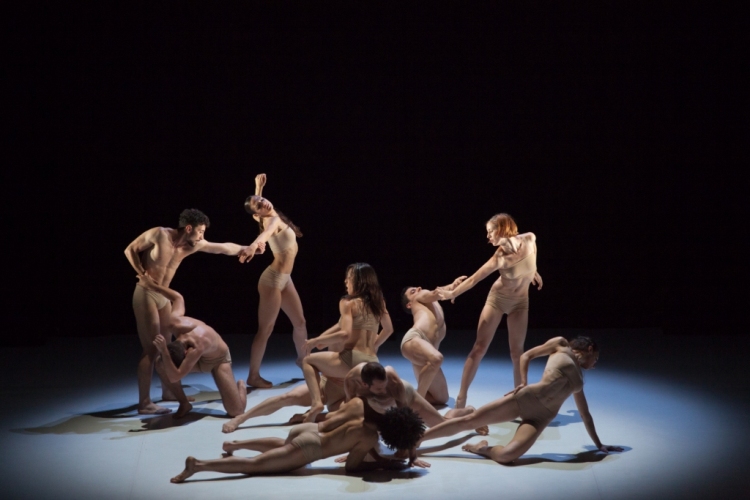 If there is one, which re-staging/re-enactment/reconstitution of Giselle do you love most and why?

It’s hard to say… But if I related to another choreographer then Mats Ek for sure was the one who made a difference for me. Just through working I started some research on this piece. I love this ballet but I also used it as a ready-made, to transform it into something else, to bring it into the present.

Like Jean Coralli and Jules Perrot in the past, you co-authored this Giselle with Itamar Serussi. What about your co-authorship? How did you proceed to create your own piece?

Well, we had a couple of meetings together and Peggy [Olislaegers] was in and Roberto [Casarotto] too. We talked together on how it might be possible to bring things together like … little problems like: who is Giselle? Is Giselle the same in the first and in the second act? What kind of costumes may we use? May we use the same ones? And then, the more we worked on it the more we found out together with these people that the second act is something really different. Concerning the first act, it’s more… traditional, the second act is very… supernatural. […] The more we tried to relate and to bring everything together […] the smaller the bridge of transformation became, because then we said: okay, you work on that and I work on this. Of course we knew what the other was doing and we watched each other but the longer we worked on it the more we tried not to combine it. […] 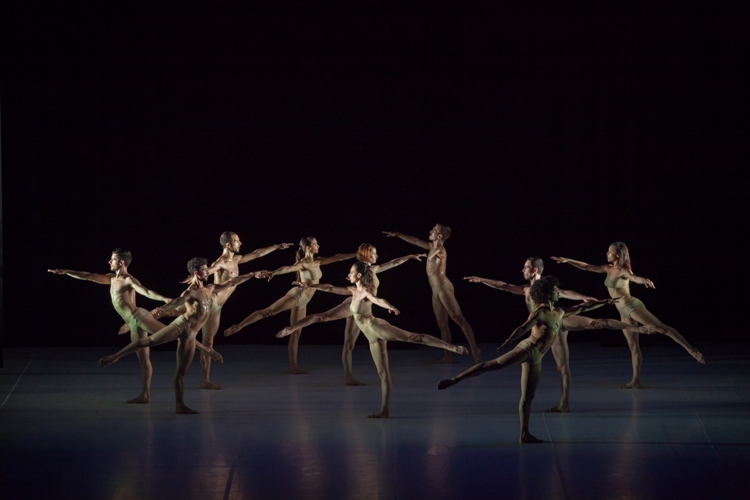 Concerning the staging, in the second act the backdrop is completely black and, unlike many of your creations, there are neither videos nor projections. Was that a renouncement by you?

No, it wasn’t. I mean, I worked with different Ballet companies like the Moscow Ballet, the Ballet of Montecarlo… In that case we worked a lot with movies and videos but in this case it was different because first of all I really liked the [Balletto di Roma] dancers very much. It was hard for me to choose who was not to be in it because it happens so often that you have to say I want this and this but I found them all very interesting, I find them very diverse. So, it was clear that the concentration is really much more on the body and I also think… we worked on the ready-made and if you take pieces out from that time – 1841 – we relate it more to some of the positions, some of the movements, like you had the arabesque jumps or… like… little details. You know… you look at it, you keep it and maybe you repeat it again and again and again. It’ s more a way of working on how we do things nowadays because repetition I think is very sculptural.

What about the voice off-stage that you’ve inserted while dancers are performing the second act?

The English dialogues are [excerpts] from earlier Andy Warhol movies, because […] with Liquid Loft we’re working on them and the Factory. [In a certain way] they have got the same constellation […] not on narrative but on the female situation […]. And the other voices [in Italian] we recorded at the very beginning: we talked a lot with each other and we asked the dancers what they knew about Giselle. Marcos [Becerra] for example was dancing Giselle for the Cuba Ballet, Monica in London, and Claudia in Rome… So, they all had different views on it. They told me what they think and what they know about the piece. And then we asked them what they did not know about the piece and that was what I liked: saying something that Giselle is not.

What was it like to work with the Balletto di Roma Company?

Wonderful. Such a nice group. I think the input that Roberto put into the Company in quality of artistic director has been great, he’s been so respectful! For me it was very tricky because he had to think about an Italian audience… about the stages… about the company… about new choreographers…! And I was also impressed about the group.