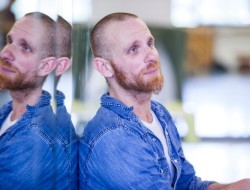 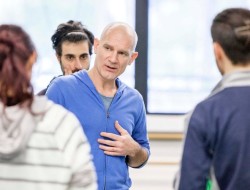 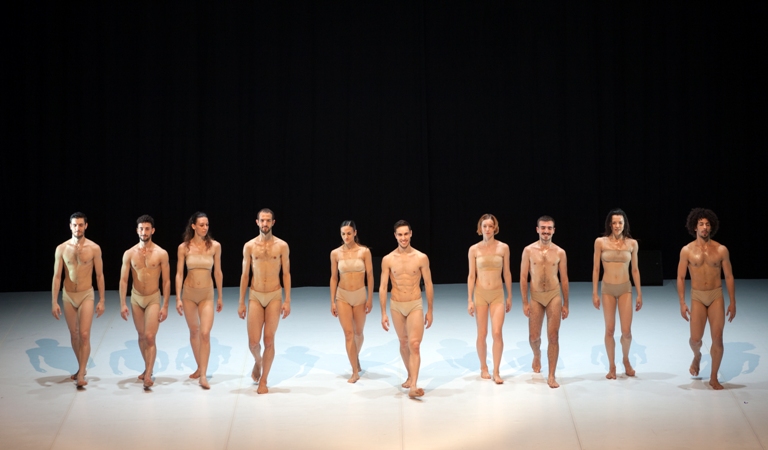 The italian version of the interview is available here: http://www.abcdance.eu/approfondimento-incontrando-giselle-intervista-con-roberto-casarotto/

It is a barefoot Giselle that is danced by Balletto di Roma. Barefoot dancers who have embodied Giselle and multiplied, wearing flesh-tone costumes, minimal and unisex. The scene is also bare, standing out from a white backdrop in the first act and from complete blackness in the second. No prima ballerina in tutu and pointe shoes, but a multitude of men and women, each with their own hairstyle: some bearded, some moustached; some with curls, some with ponytails, some with flame-red helmet bob cuts.

Roberto Casarotto, artistic director of the Balletto di Roma, wanted this contemporary Giselle to challenge our established and nationally-based imagination that anointed Carla Fracci as “the eternal Giselle” and in this piece “the emblem of the perfect ballet” — as Vittoria Ottolenghi wrote — reconfiguring it in a new way. A Giselle with all the tinsel stripped away, which thus exposes us to great formal and emotional simplicity. It allows us to view the wider vision, combining two different styles of dance in a ideal fusion , never interrupted between the first and second act. Itamar Serussi indeed begets the earthy and natural carnality of the first act, Chris Haring the phantasmagoric and “cannibalistic” nature of the second.

The core theme shines through from this nineteenth-century ballet, the “existential” plot: the playful falling in love, the insouciant passion and innocence of Giselle, unwitting prey; the avenging fury and predacity of the Willis (fairies) in the second. But in this Giselle both masculine and feminine are allies in the common struggle to defend and protect the vulnerable purity of love from the beastly jaws of persecutors.

Here is my interview with Roberto Casarotto. 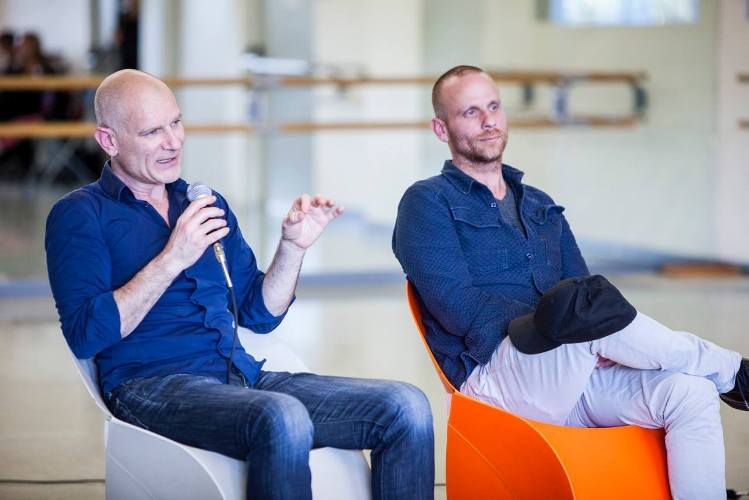 First and foremost, because I had spent time with both Chris and Itamar: I experienced a solid relationship of trust and over time I built a mode of exchange and collaboration that has allowed me to feel comfortable with the management of this idea and of this project.

Why two choreographers? I wanted to take a cue from a romantic classic and see what values it would inspire today, what values of this work could somehow stay true, achievable, or be rejected. So I chose Giselle because dramaturgically it is divided into two acts: an act that takes place very much within a terrestrial context; and a second act that by contrast develops into an imaginary afterlife. Thus I wanted, following the natural dramaturgy, to offer dancers as well as the public the confluence of two stylistic linguistic, artistic universes, in a sense completely opposite. 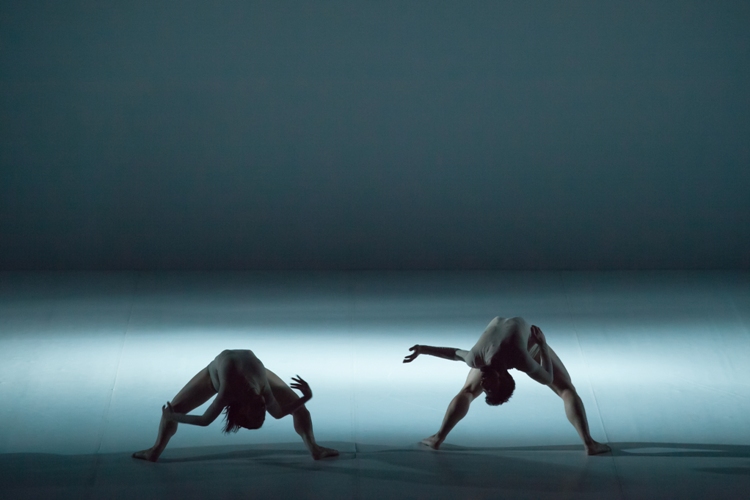 I entrusted the first act to Itamar Serussi because I feel that his dance is very earthbound, with a force of gravity that pulls down towards earth. To Chris Haring I assigned the second act because with his multilingual and interdisciplinary imagination he always manages to create almost dreamlike or anyway surreal universes.

I wanted to have Peggy Olislaegers by my side in order to develop a whole mode of working. In this way we all set off, dancers in pride of place as they have the most invested in the game after all, because already in the creative process they have had to come up against a creation method which they were not accustomed to; they are used to getting into the studio and having someone who takes control or shapes their choreography. However it turns out in this case that they themselves are to be co-creators, even if steered by two very particular and original authors in their approach to Giselle. The cast are put into play as themselves and have contributed artistically to what we have witnessed. 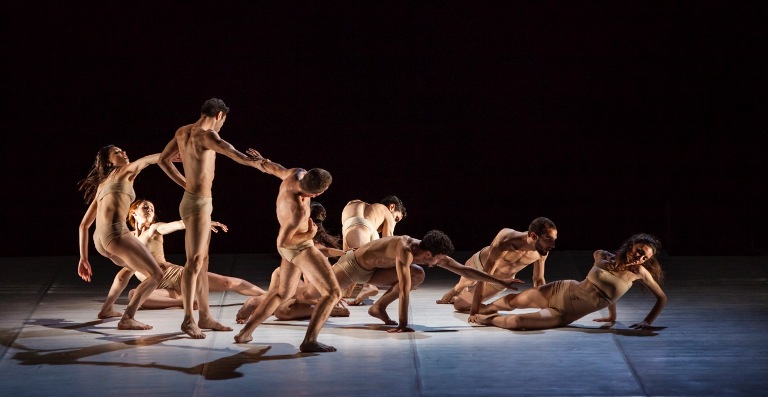 The most fascinating thing for me was to see how we were getting lost in translation, precisely due to the fact that we speak different languages. We had to find both a language for artistic use, this was one of the most fascinating experiences of this adventure; yet also a practical language, built in a sustainable manner to ensure that this show remained practicable when the two authors return to their work contexts. It would still have the mechanisms that allow the Maître de ballet to keep the process alive because they have literally formed the structures within which there are large parts of the set material, yet also the spaces in which to create instantaneous compositions: something extraordinarily innovative for dancers that come from a more academic training. I truly see the potential for exponential growth for this company in following this approach.

As head of the international dance programme for OperaEstate Festival weren’t you involved in the Dance Well event and didn’t you recently ask those dancers to put on Giselle in Villa Rossi Park in Santorso, near Vicenza?

Yes, there with Dance Well we are trying to create opportunities to meet, research and interact with various artistic ideas between the members of our community, then they might well come together within the Festival programme, as tends to happen with other such projects, as with the Audience Club. Knowing that Balletto di Roma would come I wanted to offer Dance Well instructors a course that meant that our dancers would start watching videos of past productions of Giselle — like Mats Ek’s — in order to study the music score, develop their own interpretation for the different frameworks that Giselle presents. Through listening to just some of their comments tonight, this allowed them to apprehend with a more refined sensibility the first and second act as interpreted by Balletto di Roma. Earlier a lady told me that she recognised the various melodies of Giselle throughout the first act, reinterpreted by Itamar Serussi with the incursions of sounds, gunfire and so on. They had to listen to the original score and conceive of different versions of Giselle, perhaps that allowed them to enter into a more profound creative mind-set tonight. And this I think is fundamental in what is a major project in the culture of dance, in a locality where contemporary dance is only a recent arrival.

Who is Giselle today for you?

I think there’s a bit of Giselle in all of us. In a sense it is a very crucial question for us, indeed to the point that we also invited some writers to send in their ideas and critiques. We asked them what is at the heart of Giselle and what values could inspire Giselle today. Reading through these contributions, and seeing the artists at work, seeing how the dancers themselves have interpreted the various roles offered, I realised how in a sense these values of romantic ballet, of love, betrayal, sacrificial devotion, etc., are very current, are very close to our everyday lives. This is a company composed of twenty-somethings and for me it’s fascinating to see how these young people approach life. We discussed current events together with the dancers: the Kurdish fighters that battle Islamic State rather than just the terrorist attacks, these contemporary upheavals that are experienced by their peers and through whom, in some way, these emotions reverberate within Giselle.